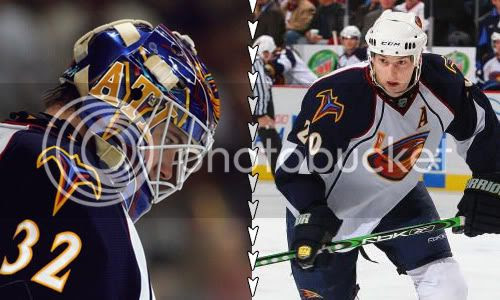 While the Colby Armstrong re-signing has yet to be confirmed by the Thrashers organization (now confirmed), the same website that broke Kari Lehtonen's acceptance of his qualifying offer has been very reliable in the past.

Both Kari Lehtonen and Colby Armstrong have agreed to one year contracts, with Lehtonen scheduled to make $3 million dollars for the next year (his same salary from 08-09) and Armstrong's contract worth $2.4 million.

Let's take a deeper look at the Thrashers re-signings, starting with yesterday's inking of the young Finn netminder. Last year, Lethonen posted a record of 19-22-3 in 46 games while registering a goals against average of 3.06 and a save percentage of .911. In four full seasons with the Thrashers, Lehtonen has only appeared in more than 50 games one time (2006-07) and Kari's GAA was over three per game for the first time in his career.

Kari's 2008-09 numbers were very similar to his 2007-08 statistics and Karppa missed significant time in both seasons due to injury.

Regarding Lehtonen's contract and status within the team, I think that Kari accepting his one year qualifying offer was a solid move for both sides. Lehtonen's numbers don't warrant a raise and the arbitration process may have just proven that even further. Kari has stated numerous times that he wants to remain in Atlanta, but this is the second consecutive one year contract that the Thrashers have signed with Lehtonen.

From the Thrashers standpoint, I think this is a very smart move. I've been met with some opposition on the official Atlanta Thrashers Message Boards. Here are my reasons why I think that a one year contract is beneficial:

1. Because this is a one year deal and Kari Lehtonen is neither 27 years old or has seven years of NHL service, Lehtonen will remain a restricted free agent next offseason.
2. With Lehtonen's injury history and inconsistency in net, the Thrashers are not committing multiple years to an unkown commodity.
3. Atlanta doesn't give up on Kari Lehtonen; giving Karppa every chance (two one year deals and a roster spot is very generous) to live up to his talents and potential.
4. Ondrej Pavelec, while a very good prospect, is still not ready for a starting spot in the NHL. Pavelec should be given a real shot to make the roster this camp, regardless of Lehtonen and Hedberg being under contract already.
5. If the Thrashers fall out of contention, Kari Lehtonen still has a good bit of trade value. Atlanta doesn't need to get a king's ransom in return because the prospect pool is reasonably stocked and the NHL roster is starting to take shape.

To me, I think the one year deal makes sense for Lehtonen and his future as an Atlanta Thrasher. This is yet another opportunity for Kari to prove himself to this franchise and raise his game to the level that fans have only seen for five or six game stretches. As for Colby Armstrong, I'm less of a fan of his one year contract.

Armstrong is reportedly going to make $2.4 million on a one year deal that the Thrashers agreed to before his case went to arbitration. Colby had his first 20-goal season in his first full year with Atlanta in 2008-09 and ended up with 40-points (22 goals, 18 assists). The salary of $2.4 million seems fair for Armstrong; a young player with positive scoring upside, solid defensive game, a good physical presence, and a strong locker room personality with leadership qualities.

Colby, after a slow start that mirrored the team's, really picked up his play around the holidays last season. After scoring just three goals in his first 29 games, Army churned out 18 goals in the final 53 games; a scoring pace of nearly 28 goals per 82 games. Colby finished with 31 points in the in those final 53 games from December 16th on.

While I feel the $2.4 million invested in Colby Armstrong for next season is certainly worthwhile, I can't help but be pessimistic about the Thrashers chances at signing Army long-term. The general consensus amongst fans (for what it's worth) is that Colby was heartbroken after his trade from Pittsburgh to Atlanta in part of the Marian Hossa trade during the 2007-08 season. There is speculation, not completely out of thin air, that Colby Armstrong is not enamored with hockey in Atlanta; the atmosphere, the culture, the coverage, and possibly even the product on the ice.

The Thrashers are going to have a hard time convincing Army to stay in Atlanta for the long-term when his first chance at unrestricted free agency comes available next summer. Colby has done nothing but put on the right face for the public in Atlanta, but I'm hard pressed to believe that Armstrong wouldn't take advantage of the opportunity to listen to offers from larger, more traditional hockey markets. There was plenty of interest in Army at the trade deadline this past season and he is coveted by many executives around the league. Colby has the build of a perfect addition for a playoff bound squad.

I know that Don Waddell insisted on Armstrong in the Hossa deal and that the Thrashers GM would love to sign him to a long-term deal. I can't help but feel that this short-term contract was pushed from Armstrong's camp. The NHLPA is in place so that players like Armstrong can take advantage of unrestricted free agency when that right is afforded to them. I would not take any intention to test free agency next summer as a personal insult to the Thrashers either... My crystal ball doesn't always work, but I foresee this coming season as Armstrong's last in the ATL.

However, if Armstrong doesn't factor into the Thrashers' long-term plans, then Atlanta could have a very valuable bargaining chip come the 2010 trade deadline day. Also, Atlanta is not without solid checking line wingers in the system with Spencer Machacek, Riley Holzapfel, and Carl Klingberg all pointing to NHL time within the next couple of seasons... not to mention the likes of Joey Crabb, potentially Jordan LaVallee and Tim Stapleton, Anthony Stewart, and even long shots like Niklas Lasu, John Albert, and Andrew Kozek.

Colby is a really good hockey player and maybe a surprise and spirited run from the Thrashers in 2009-10 might not just convince Ilya Kovalchuk to remain in Atlanta, but also quality depth guys like Colby Armstrong as well.
Posted by Zim at 7:38 AM

Which Atlanta signing or re-signing is the most important to the Thrasher success for 2009-10?